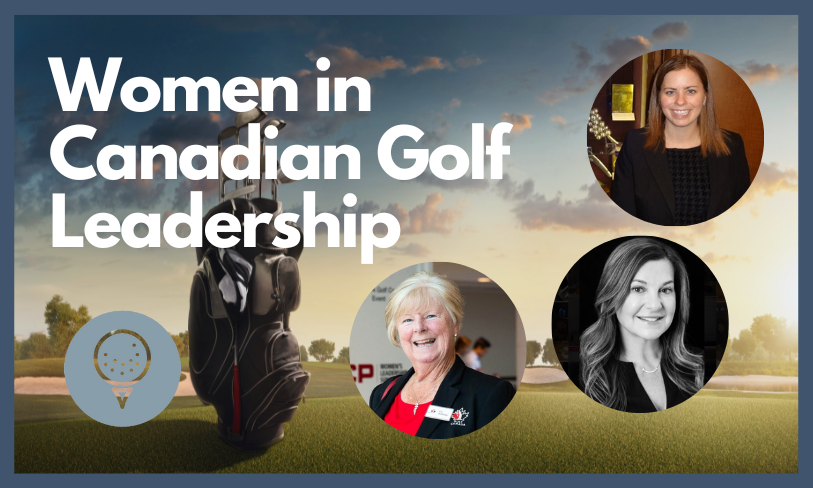 Things are changing in the golf boardroom. More women than ever before are stepping up to the leadership tee in Canada, taking on national roles...

Golf has traditionally been a male-dominated sport on the fairways, and behind the scenes.

However, things are changing.

While this change contrasts with golf’s reputation as a male-dominated sport, it is welcomed. Golf needs more diversity and more equal representation on and off the course.

Check out three of the women leading the charge when it comes to females in national golf leadership in Canada.

Liz Hoffman is currently serving her second term as Golf Canada’s president. She was on Golf Canada’s Board of Directors for nine years before taking this position.

She also worked on a variety of projects and committees within Golf Canada. Areas of commitment include Compensation, World Junior Girls Steering, Amateur Competitions, Human Resources, Diversity Enhancement, and Scholarships and Grants, to name a few.

Additionally, over the years, she has acted as Tournament Chair within Golf Canada and as a Starting and Scoring Official at all levels of competitions. No stranger to the competitive world, she won provincial championships in both Ontario and Quebec.

Hoffman brings a wealth of experience in athletics having spent 39 years in sports administration with the University of Toronto.

She has also captained many Canadian Women’s teams over the years.

It’s no surprise that she loves golf! Hoffman belongs to two golf clubs, Thornhill Golf Club and Mad River Golf Club, where she enjoys playing golf with her family.

Things are changing when it comes to women in golf: on the course & in leadership.

Mary-Beth McKenna, in addition to her Championship and Rules responsibilities, passionately works on promoting golf for women. Some programs which she works on include the “Golf Canada Women in Coaching Program” and “Golf for the Cure.”

The Women in Coaching program started in 2021. Its goal is to increase the number of female high-performance golf coaches to reflect the number of Canadian women golfers.

Golf for the Cure is a program which aims to increase women’s participation in golf while raising funds for cancer research.

McKenna also Chairs the “CP Women’s Leadership Summit.” The Summit is part of the CP Women’s Open. It features a panel of accomplished female athletes and businesswomen. It is a popular charity event that promotes women’s competitions and accomplishments.

McKenna is also an excellent golfer. She played competitively for Xavier University in Ohio before returning to Canada to begin her career in golf rules and officiating.

The amount of support RBC provides Golf Canada is extensive.

Starting early with youth in underrepresented communities in Canada, RBC sponsors programs such as “The First Tee” and “Youth on Course.”

RBC supports elite golfers, such as Brooke Henderson, in addition to assisting younger golfers to get into the game.

The RBC Heritage and Canadian Open are also hosted under their sponsorship. At these events, RBC raises and distributes more than $25 million to local charities.

In addition to her participation with RBC, DePaoli is a member of the WISE Board in Toronto. WISE is an organization that empowers women in sports and business.

DePaoli is keen on helping women excel in business.

In addition to these three women at a national level, British Columbia is one of the provinces with female golf presidents. You can read all about Michelle Collens and her passionate dedication to furthering women in golf and leadership here.

Who are the most influential women in golf in your opinion? Let us know at This email address is being protected from spambots. You need JavaScript enabled to view it. and perhaps we will publish them in an upcoming article!