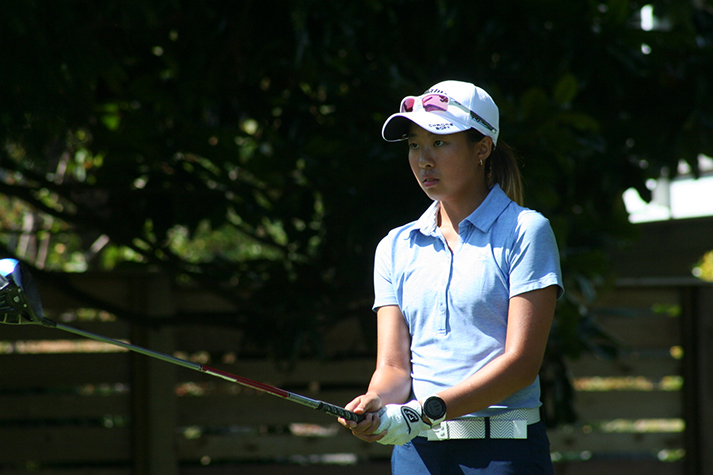 She played a practice round with Lexi Thompson, birdied her first hole at the U.S. Women’s Open and created some memories that will last a lifetime.

Surrey’s Lauren Kim had an absolute blast at her first U.S. Women’s Open and will return home to her Grade 11 classes at Earl Marriott Secondary more determined than ever to one day becoming a full-time touring pro.

“It has been amazing,” the 16-year-old Kim said over the phone from Pine Needles Resort in North Carolina.

“I have been meeting a bunch of new people, playing against the best players in the world and just getting to experience what it’s like to be on Tour. I have really enjoyed it.”

Kim shot rounds of 75 and 73 and her six-over total left her three shots shy of making the 36-hole cut. While she would have loved to play the weekend, Kim is taking lots of positives from her first two rounds. “I think my score doesn’t reflect how well I actually played,” she said.

Lauren Kim Gets Set To Tee Off At Pine Needles. (Photo By Kevin Kim)

“I avoided the big numbers. I made a bunch of pars, which is really important in a tournament like this. I didn’t make as many putts as I wanted to, but I played some really good shots and I think that is something I can take away from this tournament.”

Speaking of good shots, Kim’s first three in Thursday’s opening round were just about perfect. She started the tournament on the ninth hole — tournament organizers sent players off the first and ninth holes due to the awkward location of the 10th tee — and striped a drive down the middle of the fairway.

“I had about 130 (yards) left and it was an afternoon tee time and the greens were pretty firm, so I decided to hit 9-iron,” she said. “I landed it five yards short and let it creep up to the hole. I had about six feet left for birdie and made it.” 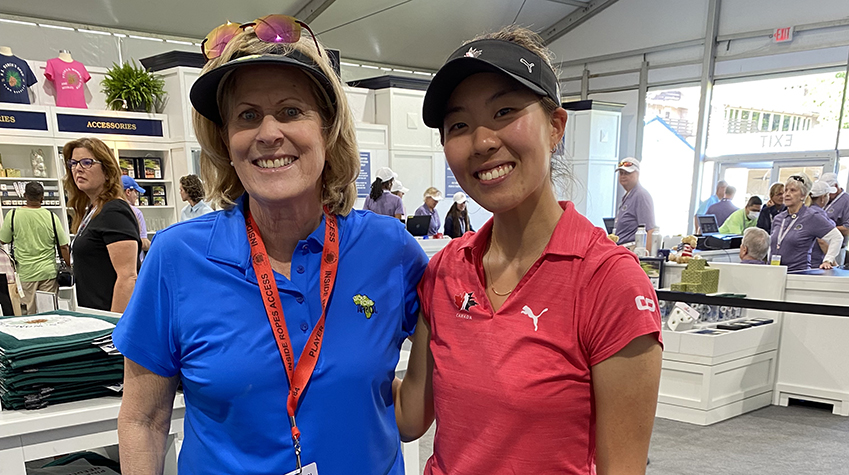 If there were any nerves, that start helped calm them, although Kim insisted she didn’t have any serious butterflies. “That first tee shot, it actually wasn’t that bad,” she said.

“I am pretty good at blocking things out and there weren’t many people watching me. Overall, I wasn’t that nervous. The first day I definitely had a lot of adrenalin, especially for the first nine. But after that I was just playing like it was any other tournament.”

Kim did not make anything worse than a bogey in her two rounds. That was in due in large part to her driving. She doesn’t think she missed a fairway in either round. “There’s actually not a lot of rough on this course, but if you do get yourself in trouble you really need to try and save yourself.

"There’s a lot of fescue, the bunkers are not too deep but if you get in there its’s kind of hard to save yourself. But the fairways were very generous. I hit every fairway and think I was tied for first both days in fairways in regulation.”

Kim, a member of Golf Canada’s national junior team, recently committed to playing collegiate golf at the University of Texas in the fall of 2023. One of the highlights of her week came shortly after she arrived on site. She got to play part of her first practice round with Thompson.

“It was very cool,” Kim said. “She offered some really amazing information I never thought about which actually helped me during this tournament.” 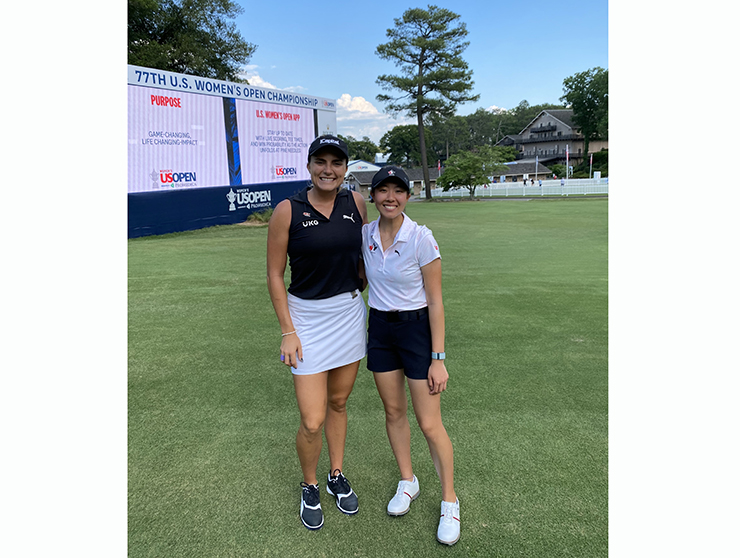 Kim can thank American Airlines for that practice round with Thompson. The airline lost her clubs and Kim had to wait at the airport for three hours to get them. By the time she got to the golf course and registered she had missed her Monday practice tee time.

“My caddie has been caddying on Tour for a long time so she kind of had these connections and got me to play with Lexi which was a cool experience.

Thompson, who has played every U.S. Women’s Open since first qualifying as a 12-year-old in 2007, obviously knew the kind of emotions Kim would be dealing with in her first Open and was happy to pass on some wisdom.

“She also taught me a new chipping technique,” Kim said. “That’s definitely something that will stick with me.” 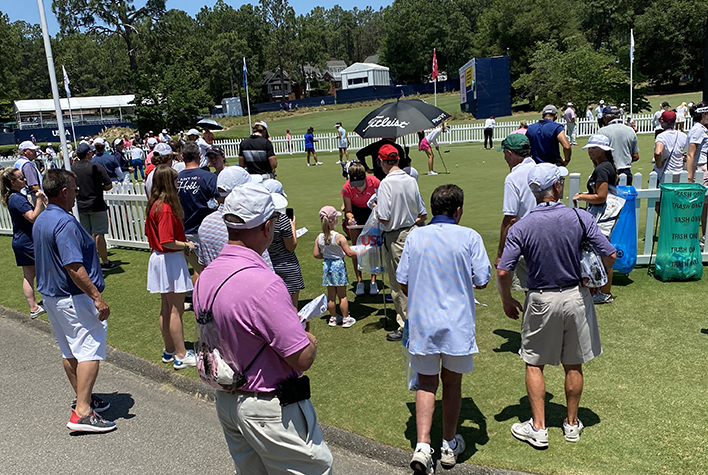 Lauren Was Even Asked To Sign Autographs By Some Young Admirers. (Photo By Kevin Kim)

Kim and her dad, Kevin, stayed in North Carolina through the weekend. As a tournament participant, Kim was able to use the practice facilities on the weekend. She also spent some time watching the leaders on the course.

She also got to keep her courtesy car through the weekend. “It’s very nice,” she said. “It’s a brand new Lexus and still has all the stickers and stuff in it. I even got to drive it a few times.”

Overall, the week-long experience at Pine Needles further solidified Kim’s desire to play golf professionally. “When I got here, I just knew this is what I wanted to do and this is the right career for me,” she said.

“So I can’t wait to try and come back out and play next year.”