The Evolution Of Female Golf Fashion 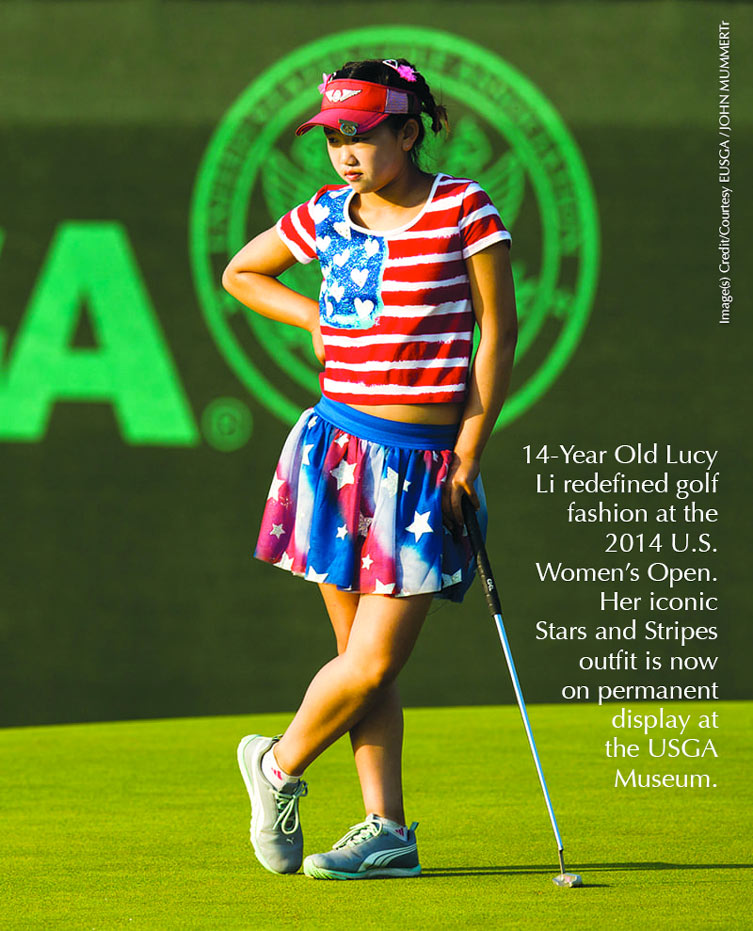 Females have been golfing since the 1800s and fashion choices have changed dramatically since. Historically, style on the course often reflected the conventions of the time...

While collared sleeveless tops and skorts extending past mid-thigh are generally accepted today, these common pieces of modern apparel were not always permitted on the golf course. 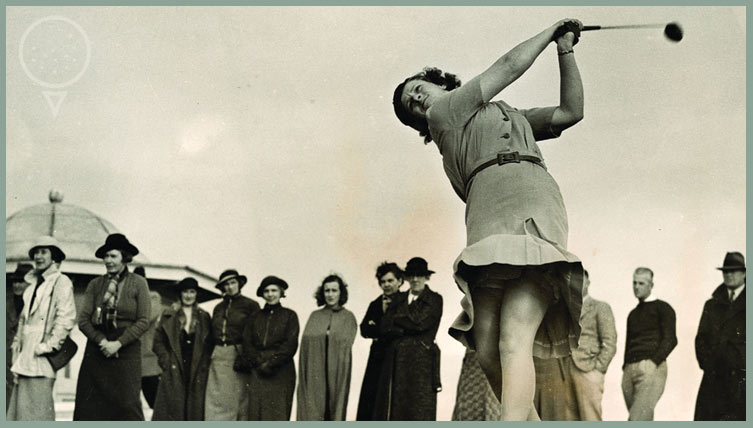 Shown Above Is The Legendary Babe Didrikson Zaharias Who Contributed To The Change In Perception Of Women As Athletes & How They Should Dress. After Winning Two Gold Medals In Track & Field At The 1932 Summer Olympics, She Turned To Professional Golf In 1938 & Won 10 LPGA Tournaments Over The Next 16 Years.

Duties in this period for women were mostly limited to domestic ones and golf was reserved for higher-class individuals and males. Women were yet to achieve many equal rights to their male counterparts and thus were treated as property and viewed as lesser beings. This period, however, marked the introduction of females in golf as both playing members and competitors. Women’s fashion on the course in this period reflected what they wore at home: traditional, modest Victorian apparel consisting of full-length dresses and skirts with stiff petticoats beneath. This heavy garb would certainly make swinging and putting challenging. 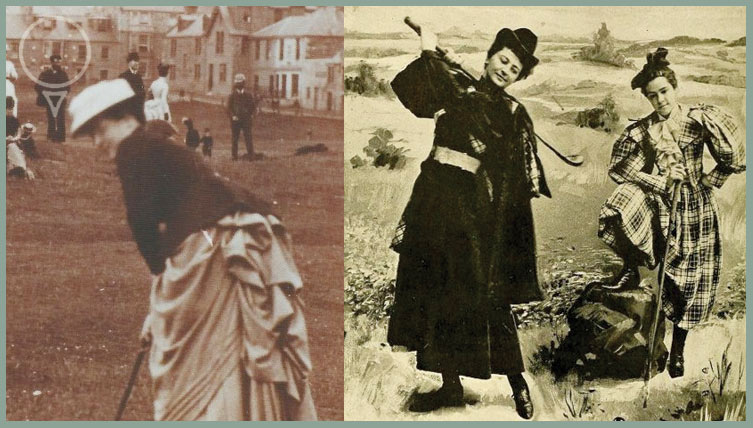 Although golf was traditionally reserved for men and the wealthy, women’s involvement in the game started to grow sharply at the turn of the century. A need for female course fashion was found and at the forefront was London-born fashion brand, Burberry. Burberry introduced a radical determination that women’s golf apparel shouldn’t restrict their ability to swing. Burberry initiated the transition to more comfortable attire consisting of a pleated skirt, simple blouse, and cardigan sweater over top. 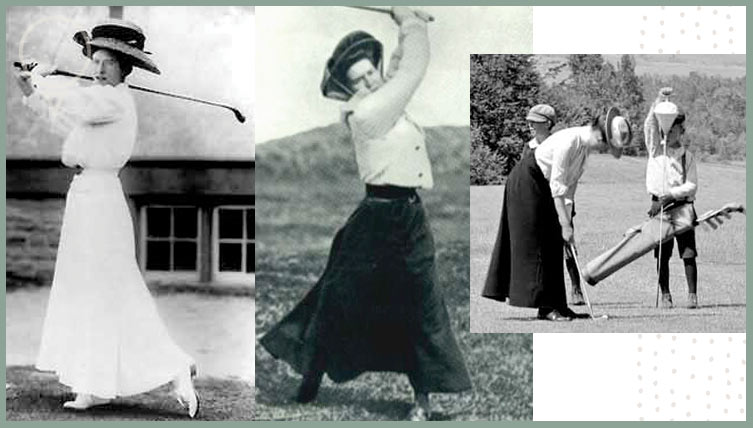 The Turn Of The Century Saw The Rise In Long Skirts More Suited To Swinging A Golf Club.

After the first World War, everyone was itching to celebrate and thus, this period was coined the “Roaring Twenties.” This period marked one of change and exploration with the women’s suffrage movement having gained immense traction and women, as result, now having the right to vote. Female golf participation increased and big fashion brands started to notice. Golf fashion took off in popularity with features in popular publications, such as Vogue. One-piece golf dresses were introduced in this period. 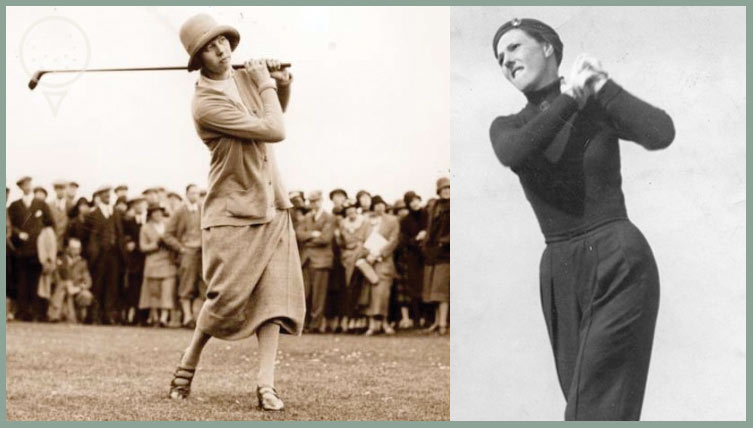 Joyce Wethered (Left), Who Won The British Ladies Amateur Championship In 1922, 1924, 1925 & 1929. Bobby Jones Called Her The Best Golfer, Male Or Female, That He Had Ever Seen. Gloria Minoprio (Right) Who Competed In The British Ladies Championship In 1933 As The First Woman To Wear Trousers, Called ’Slacks.’ Golf Writer Henry Longhurst Described Her As ’The Best-Dressed Woman Golfer I Ever Saw, Innumerable Women Have Copied Her.’ To Say The Attire Caused A Stir Would Be An Understatement. Her Outfit Is Now In The Possession Of The British Golf Museum In St Andrews.

Although the standard attire remained the same (blouse, cardigan, pleated skirt) on the course, hem lengths began to shorten in this period. Female professional golfers had entered the scene in the recent decades prior and as a result, the LPGA was established in 1950. Demand grew for apparel items that remained modest and feminine but were more athletic and easier to move in than in former years. For the first time, skirts above the ankle were permitted on courses. During warm months, sweaters were replaced with short-sleeve blouses. “Sack dresses” were often regarded as a conservative choice for female golfers at this time, although many opted for skirts and dresses with a defined waist. 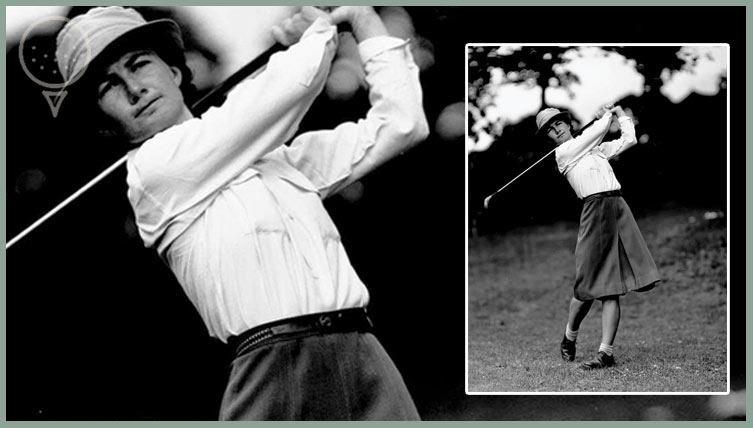 For the first time, women’s golf was televised. One exhibition match (featuring the team of Arnold Palmer and Dow Finsterwald and the team of Mickey Wright and Barbara Romack, where the female pair won) made a particular impact on female participation and recognition in the sport. Wright went on to win 68 LPGA tour events in this decade with many of the events broadcast on TV. The 60s were a period of experimentation and much like the streetwear of this period, bold colours and patterns also made their way into women’s golf wardrobes. Hemlines shortened further and the “skort” made its first appearance. Comfort was at the forefront of female golf apparel to improve movement and swinging ability with many women electing loose and flowy garments. 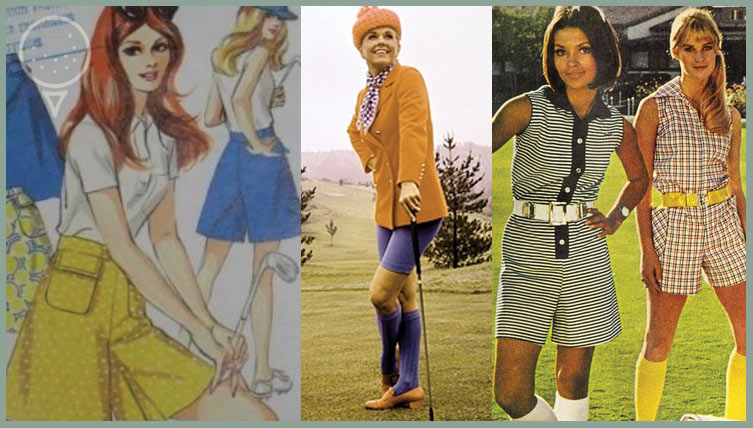 Golf attire in this period became less about feminine silhouettes and more about unisex appearances as women sought to demonstrate power and equality among their male counterparts on and off the course. Golf dresses disappeared and flared; polyester slacks in bright colours became the popular choice. 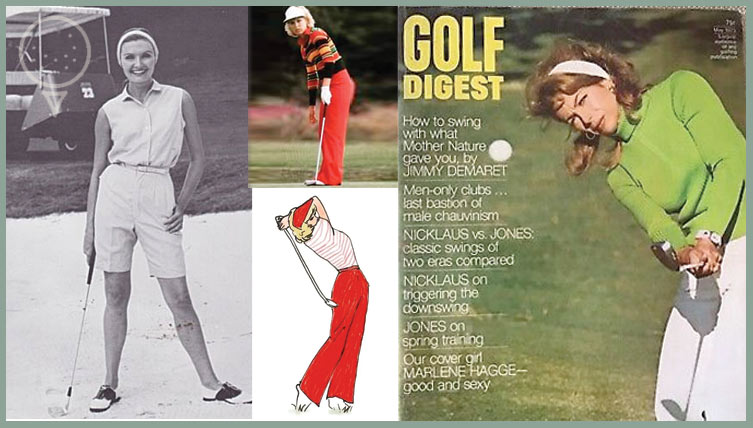 This era was one of consumerism and materialism with many women seeking to demonstrate status and make fashion statements on and off the course. High-waisted pants with short-sleeved tops in coordinating colours were the choice of female golfers in this period. Shoulder pads sometimes made an appearance as well as solid-coloured belts. 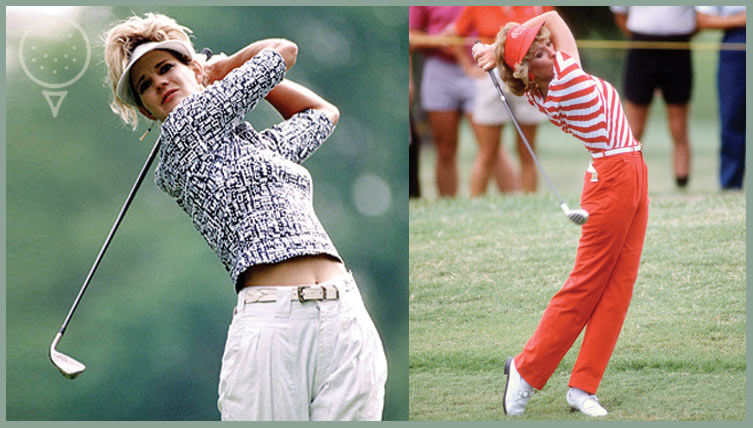 The 1990s were a period of peace and pop culture. Unisex fashion once again grew popular in this period. On the course, women swapped their 1980s bright colours for neutral hues and khakis grew immensely in popularity. During this time, women would commonly don khaki shorts or slacks paired with an oversize polo top in understated tones. A wide-brimmed visor paired with a ponytail often completed the look. 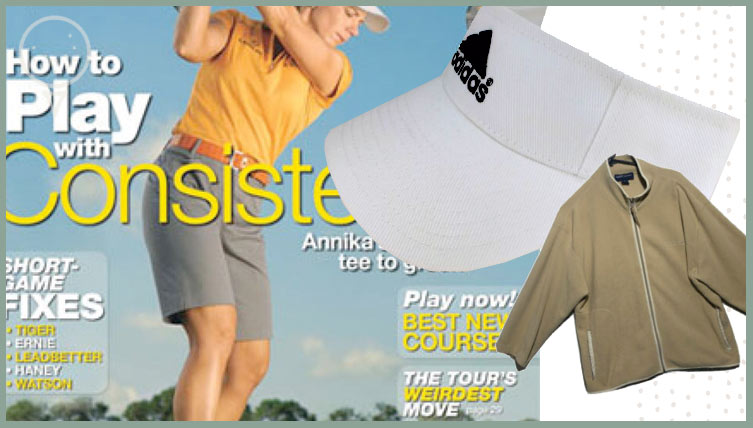 The 90s Were Strongly Influenced By Annika Sorenstam Who Dominated Women’s Golf For The Entirety Of The Second Half Of The Decade.

Female golfers began pushing the limits on what was traditionally accepted on the course by bringing back bright colours, non-traditional fabrics, and shorter hemlines. Female demand began to grow for golf fashion that could transition from work to the course and to social outings afterwards. Sleeveless blouses also grew in popularity during this period. 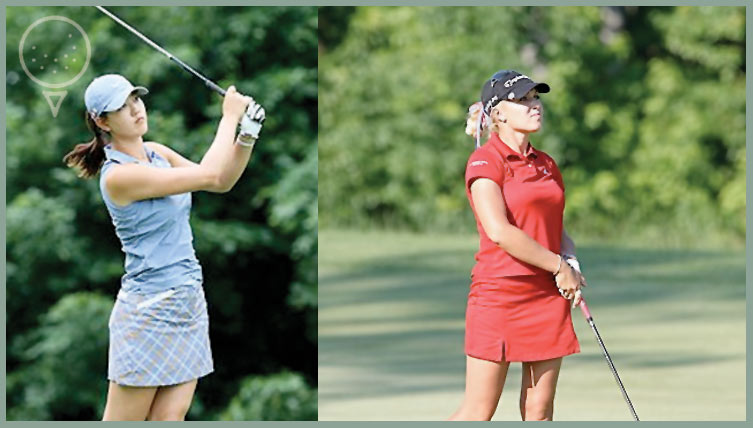 Female golf fashion of today picks and borrows from time periods prior but the dominant focus is on athletic apparel that is breathable and easy to maneuver in. Today’s female golfers can often be seen in golf or tennis skorts, form-fitting slacks, and sleeveless, collared tops. Depending on the course rules, many women will don athleisure looks to play choosing comfort as their top priority on the course. 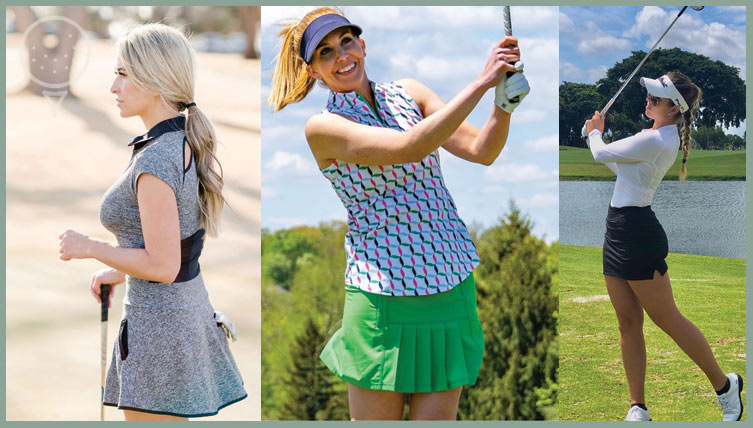 Golf Fashion Today Runs A Range Of Stylish Options Summed Up Best As What Feels Right, Looks Great & Allows Being An Athlete.

While acceptable female golf fashion has changed drastically over the last 100 years, courses today still have differing dress codes. A lot of courses have adopted a more modern approach to course-wear for women, although many still adhere to more traditional dress codes. What’s okay to wear at some courses may not be allowed at others. It’s important to be respectful wherever you choose to play; what you choose to wear on the course may have something to say about you as a person. As a good rule of thumb, check the course’s website for their dress code before you visit!