All Is Fair in Love… And Golf? LPGA vs. PGA 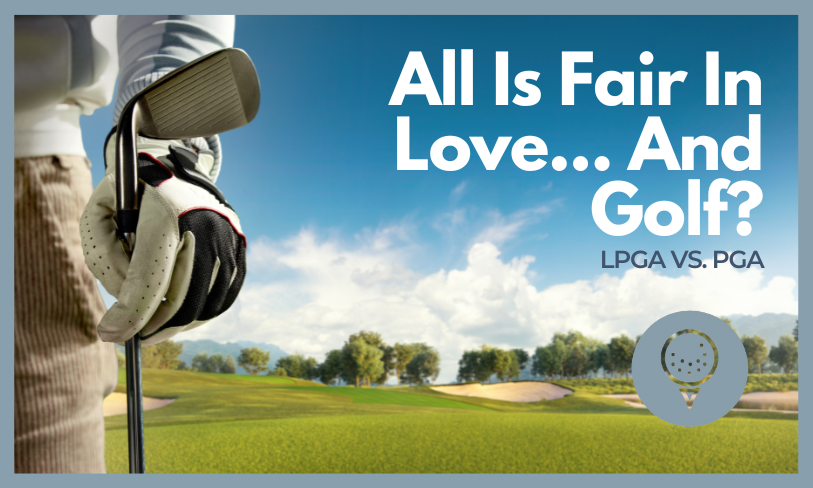 Many LPGA Tour and PGA TOUR sponsors include equal opportunity as part of their corporate values. Yet, the LPGA Tour, like many other female professional sports leagues, struggles to get equal pay and benefits to the PGA TOUR...

It doesn’t stop at just money, however...

The LPGA Tour doesn’t have equal benefits to the PGA TOUR either.

LPGA Tour players historically have not had the same medical benefits as the PGA TOUR.

Some corporate sponsors however are beginning to provide the same benefits for their athletes that they provide for their employees. They are setting the standard for other companies to match.

Notably, in 2019, Brittany Lincicome and Stacy Lewis made golf news headlines because their sponsors — KPMG, CME Group, and Diamond Resorts — agreed to pay out their one-year contracts during their maternity leave. This is unusual as most sponsor companies do not pay their female golfers during maternity leave. Hopefully, other endorsement sponsors have followed and will continue to follow their example.

Additionally, in May 2022, LA Golf announced they will be providing five LPGA partners with full healthcare. They have included mental health days, paid maternity leave, and performance-based bonuses. They are also providing assistance with travel planning and support during tournament weeks so that players can focus on their game.

Corporate sponsors have responded to the LPGA Tour’s request for more support. They are applying the values they tout in their companies with their sponsored athletes. These positive examples are setting the bar for sponsors and athletes to have meaningful discussions about gender equity in both corporations and sports.

But why isn’t everything equal?

Well, there are a number of potential factors at play, but the largest is interest.

The PGA TOUR has higher viewership and television ratings, more social media-related hype, and thus, attracts larger sponsors and event attendance. After all, the PGA TOUR and LPGA Tour are businesses and they need to generate money just like any other business firm.

It certainly is not that the PGA TOUR is necessarily more interesting. LPGA Tour golf is just as exciting and the players are respectively, just as technically skilled.

The LPGA Tour has been networking with corporate sponsors to decrease the inequality between the two tours.

The 2022 LPGA Tour championship winner’s purse has doubled since 2021. It is now $1.35 million. This is a significant increase and progress towards pay equity.

Another example of positive equity change is the Risk Reward Challenge sponsored by Aon. This challenge selects the toughest holes at 28 events during the year. The winner is the player with the lowest score. Aon runs the challenge for both the PGA TOUR and the LPGA Tour. The prize for the winner of both leagues is equal: $1 million.

While much of the push to achieve gender equality in professional golf lies in those companies with the finances to provide sponsorships, there is more that can be done by LPGA Tour fans to encourage further progress.

Watching women’s golf on TV or online is a great way to show support for the LPGA. Networks monitor the number of viewers tuning in. The more viewers, the more broadcasting and media sales. As a result, LPGA Tour tournaments will be given more priority and quality coverage thus attracting larger sponsors.

Another way to show support is by engaging on social media with the LPGA Tour and its players, which is easy and shows audience interest. Growing the number of followers is a powerful tool to encourage more corporate support for players.

Have you noticed any other major differences between the LPGA Tour and PGA TOUR? We’d love to hear about them! Email us at This email address is being protected from spambots. You need JavaScript enabled to view it. and let us know.