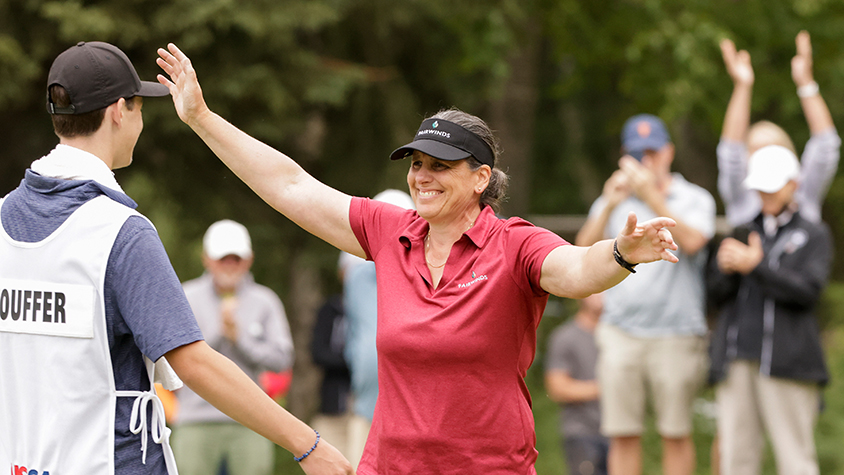 Shelly Stouffer not only won the U.S. Senior Women’s Amateur Championship, but she also made a little history by becoming the first British Columbian to win a United States Golf Association championship. “That’s pretty cool,” the longtime Nanoose Bay resident said over the phone from Alaska.

Stouffer won the event in the most convincing fashion. She steamrolled her way through the field and finished it off with a 4&3 victory over Australia’s Sue Wooster in the championship match at Anchorage Golf Course.

The 52-year-old Stouffer has done lots of winning since becoming a senior player — three straight B.C. Senior Championships and the Canadian Senior title in 2021 — but acknowledged this one is especially sweet. It is, without a doubt, her biggest senior golfing moment to date.

“It’s a USGA event, so it’s big,” she said. “Honestly, it’s so surreal, I still don’t quite believe I have won it, but it’s very awesome and cool and unbelievable. It’s amazing. I would say it’s the biggest amateur event to win.”

That she won it with her 15-year-old son Brett walking side by side as her caddy made it even more special. “He was great,” Stouffer said of Brett, her youngest of two sons.

“He was just amazing. He helped keep me calm out there, he was making some jokes and he was helping me read greens. And he was really good at talking me through some different situations and helping me decide what club to hit. He knows my game quite well because I play a lot with him at home.”

Home is Fairwinds Golf Course in Nanoose Bay, which has stepped up to help sponsor Stouffer as she travels the senior golf circuit. Stouffer got off to a wonderful start in the championship match. She birdied the first hole to go one-up and was five-up at the turn. She only lost one hole, the par 5 14th, but that only delayed the inevitable. Stouffer closed out the match on the next hole.

After emerging from the 36-hole stroke play portion of the event as the second seed, Stouffer dominated the match-play portion of the competition. She won her semi-final match 4&3, her quarter-final match 3&2, her round of 16 match 8&6, her round of 32 match 5&4 and her Round of 64 match 5&3. “I was doing pretty much everything well,” she said. “I was putting really well. I think I only had one three-putt during the match play.”

Stouffer set a competitive course record with a four-under 68 in the second round of stroke play. It was the only sub-par round recorded in 36 holes of stroke play. She only trailed in a match once and not for very long. She was two-down after three holes but stormed back to win 5&4. “That was in the second match I played,” Stouffer said. “I had a bit of a rough start. I was behind a rock and some different things happened. I conceded a couple of birdies because I was out of the hole. Then I got it together and finished that one early, too, I think.”

Stouffer was thankful for all the messages of support and those offering congratulations she received. “There are so many texts,” she said. “I haven’t even had a chance to look at them all.”

Her friends and family back home were monitoring the scores on their phones and laptops all week. Stouffer’s sister, Vancouver teaching pro Sandra Comadina, was trying to keep track of Shelly’s championship match while watching her own son play baseball. “I am watching my kid play a provincial baseball game and I am saying to my phone, ‘update, update, what’s happening.’ Then she made a bogey and I was like, ‘okay, one more hole, don’t panic.’”

Comadina was not surprised — few were — that her sister came through after being eliminated last year in the semi-finals of the U.S. Senior Women’s. “You know what, she is so solid,” Comadina said. “She’s so consistent and is such a good putter. She’s got the full game firing on all cylinders right now, so that’s really cool.”

Stouffer still has some big events to play this summer. She has a spot in the U.S. Senior Women’s Open, which goes Aug. 25-28 in Kettering, Ohio. Comadina is scheduled to caddy for her little sister in that one, but joked that she should perhaps step aside and let Brett carry his mom’s bag again. “I may have to give up that role,” she said. “I am going to ask her, are you sure, I’m okay to come and just watch. We’ll see.”

Stouffer will head to Headingly, Man. from Ohio to defend her Canadian Senior Women’s title Aug. 30-Sept. 1. She also a spot in the U.S. Women’s Mid-Amateur Championship, which goes Sept. 17-22 in Myers, Fla.