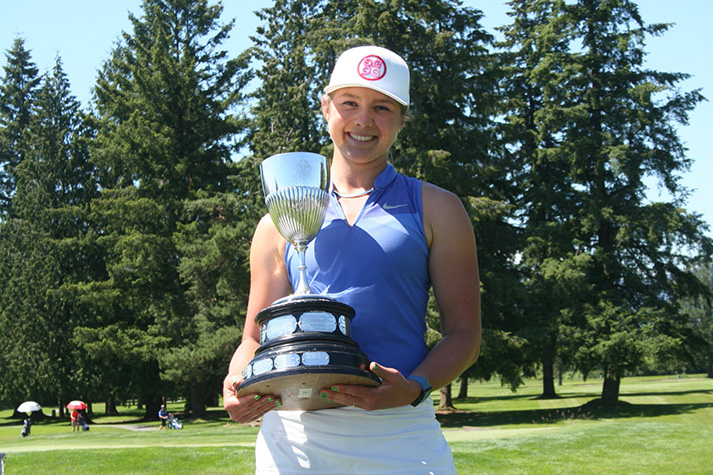 In a final round that had more twists and turns than the Sea to Sky Highway, Vancouver’s Leah John emerged on top and successfully defended her B.C. Women’s Amateur Championship at Pitt Meadows Golf Club...

Dramatic. Crazy. Unpredictable. Surprising. Pick an adjective. They all describe a final round at Pitt Meadows that included a number of lead changes and plenty of ups and downs. John won it thanks in no small part to a dramatic shot she holed out of a greenside bunker for birdie on her 17th hole.

That gave John her first share of the lead and she won despite a bogey on her final hole. John, a 22-year-old Marine Drive Golf Club member who is heading into her senior year at the University of Nevada, closed with a one-under 72 that gave her a four-round total of four-under par.

She finished two shots clear of Vancouver’s Victoria Liu, but this tournament was so much closer than that.

Liu had spent much of the day with the lead after third-round leader Luna Lu of Burnaby faltered early in her final round. But Liu stumbled on the back nine and when she and Lu stood on the 18th tee they were tied with John, who had just bogeyed the final hole. 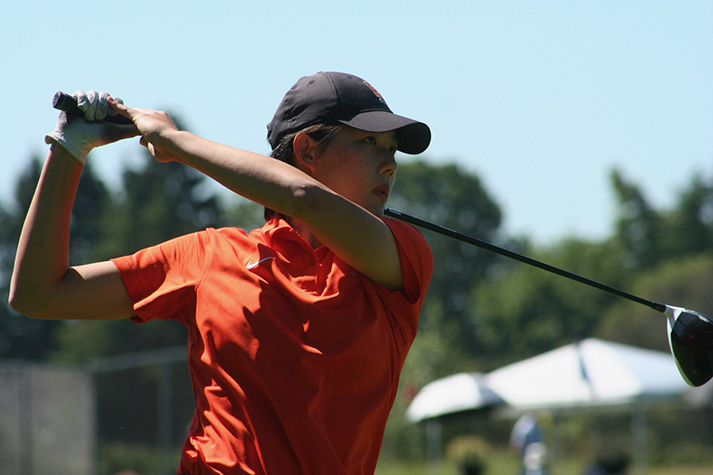 They needed a birdie to win or a par to force a playoff, but both Lu and Liu made a mess of the final hole. Liu drove it left and Lu went right. Liu went on to double the hole, while Lu, a 15-year-old Pitt Meadows member who had led the tournament the first three days, made a disastrous quadruple-bogey eight.

John was left shaking her head about the crazy finish and that unexpected birdie she made on her 17th hole -- the par 4 8th at Pitt Meadows. The tees had been moved up to try and entice players to go for the green. John was only too happy to oblige, although it did not quite go as planned.

“I was thinking we are going to drive this green,” John said with a laugh. “I blew it so far right. It’s never a good sign when you have to yell, ‘fore.’

“Then I was left with this tough chip where the only thing I could do was play to the fat part of the green. But I hit the lip of the bunker and it stayed in there. Then I holed it. Golf is a lot about luck sometimes.” 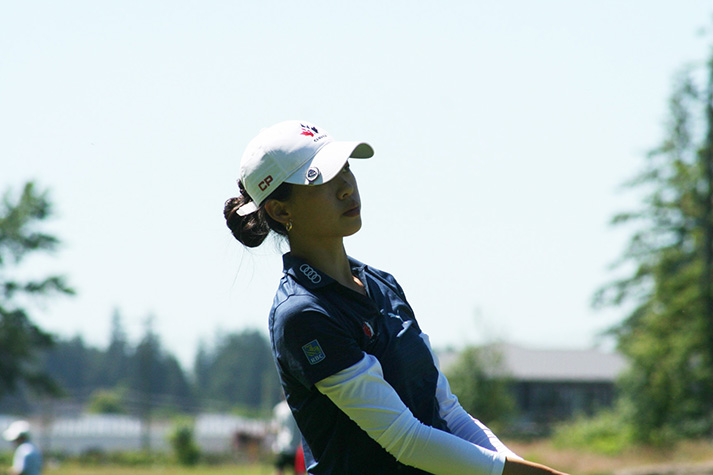 John was obviously delighted to see the ball roll into the cup. Her dad, Jason, who was caddying for his daughter, was beside himself. “Oh God, he yelled so loud,” John said. “I apologized to my playing partners. I said, I’m so sorry, my dad is intense.’ But it was pretty cool.”

John quickly added that having her dad beside her for two B.C. Women’s Amateur wins will always be one of her very special golfing memories. “It is really, really special,” she said. “My dad taught me how to play. I was potty-trained on the course. Memories like this are so cool for us.”

John had been looking forward to making a title defence for the past year, but she acknowledged it brought with it some extra pressures. John got some encouragement in the form of texts from some of her Marine Drive clubmates. One in particular struck a chord. “Doug Roxburgh was texting me last night and just saying, stick to your game plan. That was just very special.” 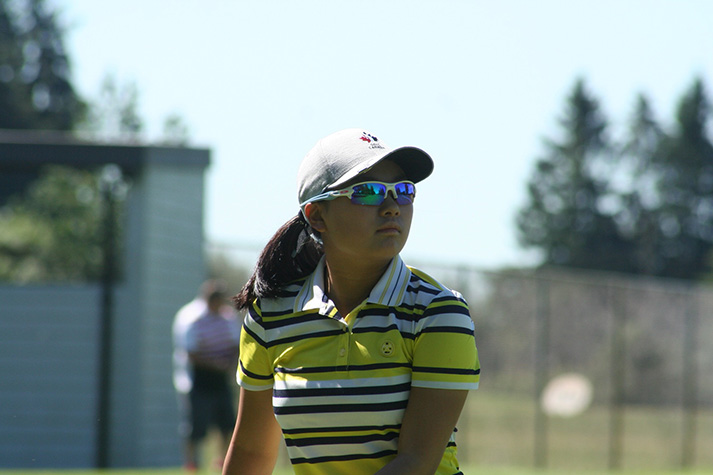 John, who is majoring in kinesiology at Nevada, planned to reward herself on the drive home. “There’s this ice cream shop that has just opened up near my house and you get ice cream bars dipped in chocolate, dipped in Oreo crumbles, just like everything that is bad but delicious,” she said. “So maybe I’ll do that.”

While John was planning her celebration, Lu and Liu were left to reflect on what might have been. Lu began the day with a two-shot lead, but that quickly evaporated when she bogeyed her first hole and doubled the third. She had staged a gritty comeback before disaster struck on the final hole. Lu finished tied for third at even-par after closing with a six-over 79.

She lost a playoff with Surrey’s Ha Young Chang for the third and final spot on the team that will represent British Columbia at the Canadian Women’s Amateur Championship, which goes July 19-22 at Westmount Golf & Country Club in Kitchener, Ont. “It was a pretty rough day, But I am glad I made some birdies on the back nine,” Lu said. “I had a tough final two holes.” 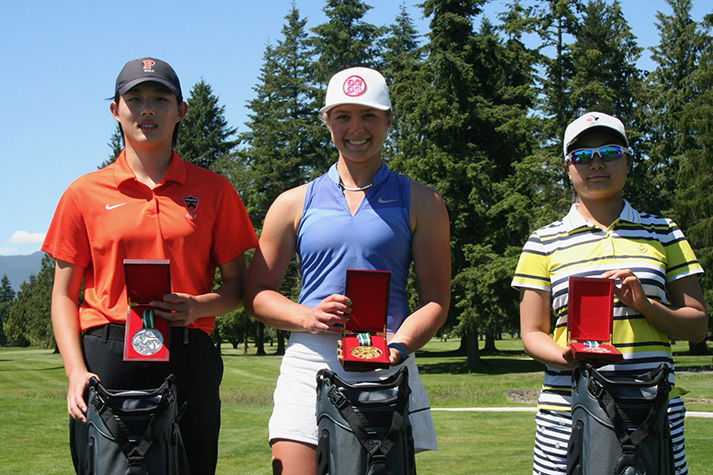 Liu, a 19-year-old Shaughnessy Golf & Country Club member who was the Ivy League freshman of the year at Princeton University in New Jersey this past year, saw her two-shot lead disappear when her approach on the par 4 5th hole (her 14th) sailed long and right. She went on to make a double to fall into a tie with Lu. “I definitely felt some pressure on the back nine,” she said. “I had two doubles which obviously was not great.”

A 72-hole better-ball competition was also held at Pitt Meadows. The team of Katherine Hao and Luna Lu, both of Burnaby, won with a score of 20-under par. That was one shot better than the team of Emily Li of Vancouver and Sonja Tang of Victoria. The Vancouver duo of Victoria Liu and Emily Liu were third at 18-under.

A 36-hole Zone competition concluded Wednesday with the Zone 4 team of Katherine Hao and Estee Leung, both of Burnaby, winning with a score of two-over par. That was seven shots better than the Zone 2 team of Natasha Kozlowski of Vernon and Jessica Claggett of Kelowna. The Zone 3 team of Coco Pei and Claire Lovan, both of Surrey, were third at 12-over.

CHIP SHOTS: John is the first repeat winner since Kira Meixner of Richmond won back-to-back titles in 2007 and 2008. . .Next year’s B.C. Women’s Amateur Championship will be held at Arbutus Ridge Golf Club in Cobble Hill.