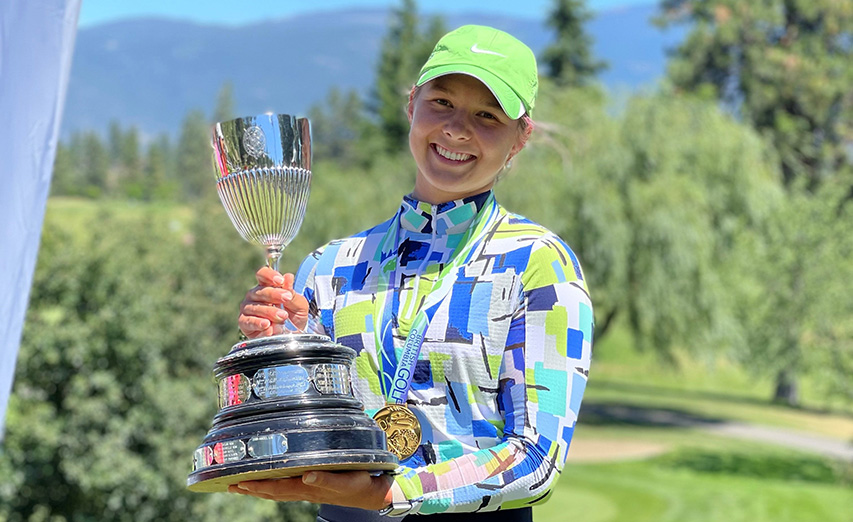 John also banked some confidence, an inner belief that she could perform on the golf course under pressure when it really mattered.

“The B.C. Amateur was the first really big tournament I have ever won,” John says. “It was just really cool to see my game come together the way I had visualized before and knew it could. It was the beginning of what gave me a lot of confidence in myself as a player.

The 22-year-old Vancouver resident will be looking to defend that B.C. Amateur title June 21-24 at Pitt Meadows Golf Club. It’s probably not a coincidence that John followed up last summer’s B.C. Women’s Amateur win with her best year at the University of Nevada, where she recently completed her junior year.

It was a breakthrough season of sorts for John, who won her first collegiate event, The Show at Spanish Trail, this past February in Las Vegas. John fired her career-low round — a six-under 66 — in the second round of that event.

She went on to record a stroke average of 73.67 last season, the fourth best in Nevada team history. “Honestly it was a dream come true, winning my first tournament and shooting a career low,” she says. “It was all-round a really incredible experience.”

While Nevada did not advance to NCAA Regional championships as a team, John’s strong play earned her an individual berth. “Qualifying for regionals was amazing,” John says of her trip to Stanford Golf Course in Palo Alto, Calif., for the West Regionals. “It was so cool.”

John, who plays out of Marine Drive Golf Club, won last summer’s B.C. Women’s Amateur by four shots after starting the final day with a two-shot cushion. “I am excited about defending,” John says. “It’s nice to know that I won it before. I know what it feels like to win it and I just want to bring that and go out and play. It’s also cool that it will be at Pitt Meadows and a new venue and all that. Overall, I am just really excited and looking forward to winning it again.”

Other notables in the field include Vancouver’s Victoria Liu, who was third last year and was named Ivy League rookie of the year after a fine freshman year at Princeton University in New Jersey, national junior team members Luna Lu of Burnaby and Martina Yu of Coquitlam, and Victoria’s Sonja Tang, who recently won the Canadian University/College individual title for UBC.

This will be the 117th playing of the B.C. Women’s Amateur and Pitt Meadows is playing host to the event for the fifth time. Head professional Wes Doka said both he and the club feel it’s important that golf courses continue to step forward as sites for provincial amateur championships.

“To keep people engaged in golf we have to give them some access,” Doka said. “If courses don’t step up and offer their facilities then how do we have these events? How do we encourage competitive amateurs to play and test their games against better players? We’ve got to do that.”

Doka said Pitt Meadows is in good shape considering the terrible spring weather the Metro Vancouver area has had. “It looks like we could be lucky with the weather next week,” he said. “If we get the weather they are calling for the course is going to be great.”

Doka thinks Pitt Meadows will present a good test for next week’s field. “With our greens being smaller, approach shots will be important,” he said. “A good short game has always been a key to people playing well here. We are looking forward to seeing these ladies play. We’ve got some good junior members here at Pitt Meadows who are playing and we are excited to cheer them on.”