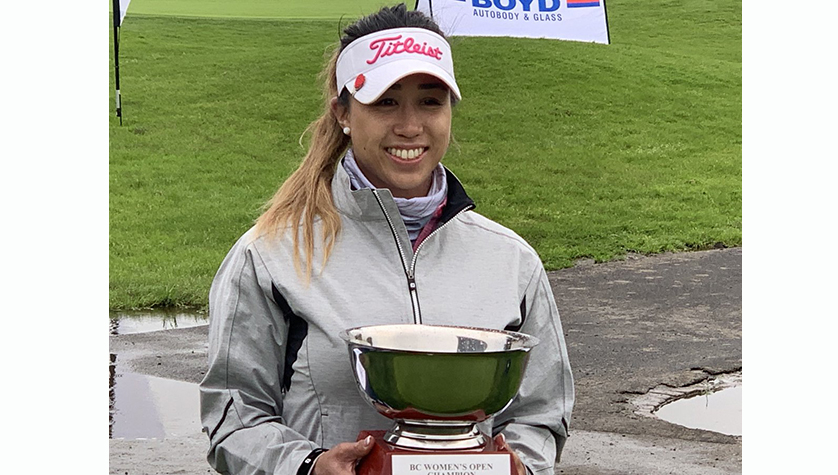 The par-4 seventh hole at Mayfair Lakes Golf & Country Club is rated as the toughest on the Richmond layout, but Christine Wong made it look easy in the final round of the inaugural GolfBC Group B.C. Women’s Open.

Wong took an aggressive line with her driver, cutting the corner by taking her tee shot over the pond on the dogleg right hole. She was left with a chip of just 39 yards, which she proceeded to knock in the hole for an eagle that helped propel her to a two-shot win.

“I had 39 yards to it, so I wanted to land it about 30 yards,” said Wong, a Richmond native who teaches out of University Golf Club in Vancouver. “And when I teach, I teach a 30-yard shot, so I was like, ‘okay, I’ve got this,’ and it went in and I was like ‘Oh, my God! After that, I just played steady golf.”

That eagle took care of the double-bogey Wong registered when her opening tee shot Sunday went left and found water. “It was a little bit of a shaky start because it was a delayed start, it was windy, and it was kind of a flustered beginning to the round,” she said.

“But after that first hole I just said there’s 17 holes to go, let’s just hit fairways and greens the rest of the day.”

After opening with a four-under 68, Wong settled for an even-par round of 72 in Sunday’s finale, which was played in cool, wet conditions. Her four-under total was two shots better than Vancouver’s Victoria Liu, who recently returned home after completing her freshman year at Princeton University in New Jersey.

Wong earned $2,500 for the win and one additional perk she is quite excited about. The Vancouver Golf Tour, with help of tournament sponsor GolfBC, is paying Wong’s entry fee and providing her with airfare to compete in the Monday qualifier for this summer’s CP Women’s Open in Ottawa. That qualifier, where two spots in the LPGA event will be up for grabs, goes Aug. 19 at The Marshes Golf Club in Ottawa.

“I am really excited about that, for sure,” Wong said. “I wasn’t planning on going originally, so now I am going to take the opportunity and go.” Wong doesn’t quite know what to expect. She’s never played a LPGA Tour Monday qualifier, although she has teed it up in one LPGA Tour event — the 2012 Canadian Women’s Open at Vancouver Golf Club — as well as the 2010 U.S. Women’s Open. 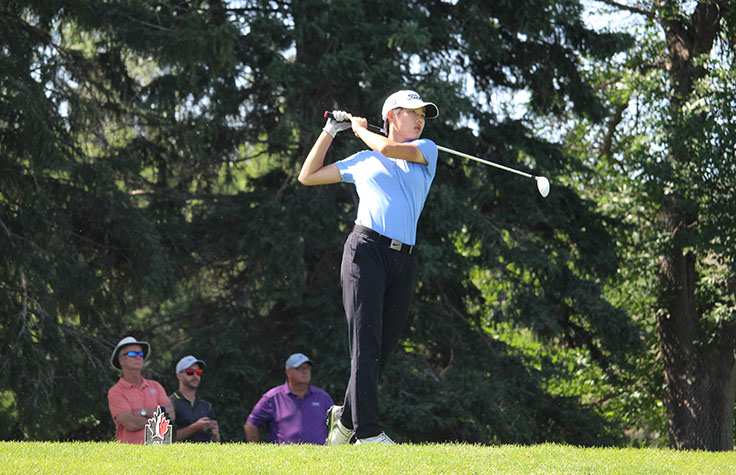 “I am literally going in with an open mind,” she said. “I came into this event just trying to play my best. I will be going into that the same way.” If Wong plays her best at that Ottawa qualifier, she will have an excellent chance of playing her way into the CP Women’s Open. The San Diego State University graduate has established herself as the top female pro in British Columbia.

She acknowledges that brings some extra pressure when she tees it up in events like the one at Mayfair Lakes. She is the favourite, the player everyone wants to beat. “Honestly I do put pressure on myself, every single event,” said Wong, the reigning PGA of Canada Women’s Champion. “Even if it’s a G&G Tour or VGT one-day event, even playing a scramble event with four random people, I get nervous. It doesn’t matter.”

Wong will now try to work extra hard on sharpening up her game. Her teaching business is thriving and she will have to make time to play a little more than she perhaps had planned this summer.

Liu closed with a one-under 71 that included six birdies and was the event’s low amateur at two-under par, edging Emma Yang of Langley by two shots. Liu had a terrific freshman year at Princeton and was named the Ivy League’s rookie of the year.

She said it felt a little strange to be playing without teammates at Mayfair Lakes. “I never knew the team game was so different than individual,” she said. “We are still playing our own ball, but that team spirit and all the support you get from your teammates is very different. I really enjoyed that. I would say I like it even more than playing by myself.”

Liu is majoring in computer science at Princeton, where she has fellow Vancouver resident Tiffany Kong as a teammate. She will play her next event at the B.C. Women’s Amateur Championship, which goes June 21-24 at Pitt Meadows Golf Club.

Nayan Calsin Murdoch of Richmond finished third overall at one-under par, but earned second-place pro money of $1,500. Rie Komoto of McCleery and Jennifer Jones of Sandpiper won the first and second amateur flights, while Phyllis Laschuk of Point Grey beat Sandra Turbide of Maple Ridge in a playoff to win the senior division.