NANOOSE BAY, British Columbia Golf — One of her sons works in the pro shop, her mom and dad had a house near the first tee and her late husband was the longtime head professional at Fairwinds Golf Club, so yes, this one meant a lot to Shelly Stouffer.

The Nanoose Bay resident won her third straight B.C. Senior Women’s title on her home course and had to work a little extra time to do it. Stouffer birdied the first hole of a sudden-death playoff to beat Sandra Turbide of Maple Ridge.

“This one was hard,” Stouffer said, fighting back tears, during the trophy presentation on Fairwinds’ deck. “There was a bit of extra pressure playing this at Fairwinds for me.”

Stouffer’s nerves showed at times. After finally getting her first birdie of the day on the ninth hole -- where her approach shot bounced off the pin -- Stouffer three-putted the par 3 10th hole for bogey. The two-shot lead she had at the turn was suddenly just one.

“It was tough,” Stouffer said. “I played pretty good, I thought, and then something happened. I three-putted 10, that’s what happened. But that’s okay. Sandra gave me a gift on 16 there. It was close, it was good competition and it was fun.”

That ‘gift’ on the par 4 16th came shortly after Turbide had rolled in a birdie putt on the 15th green to take a one-shot lead. But she missed a par putt from inside two-feet on the 16th hole and the two were tied again. Turbide just missed a birdie putt from inside 10 feet on the 17th hole and both players had looks at birdies on the 18th green but could not convert. That sent them back to the 18th tee for the playoff. 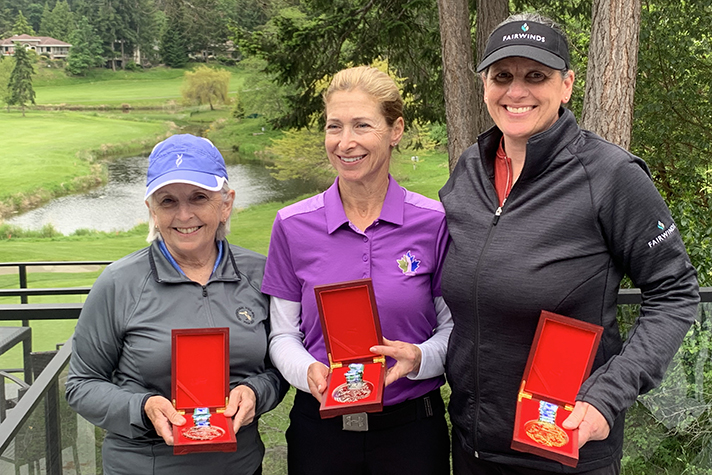 Representing BC At This Year's Canadian Senior Women's Championship In Winnipeg Will Be From L-R: Jackie Little, Sandra Turbide & Shelly Stouffer. (Photo By Brad Ziemer/BC Golf)

The tee had been moved on the par 5 and Stouffer hit the green in two, putting her seven-wood from 182 yards about 25 feet above the hole. Turbide was left with a short wedge with her third shot and stuck it about five feet right of the pin. Stouffer’s eagle look came up about three feet short.

Turbide’s birdie putt looked like it was going to drop, but hung on the top edge of the hole. Stouffer then made her three-footer for the win, raised both arms in the air and hugged her sister, Sandra, who caddied for her. “Woohoo, three in a row, two of them in a playoff,” Stouffer shouted shortly after that winning putt dropped.

Several Fairwinds members and many of her fellow competitors headed onto the green to congratulate her. There were lots of hugs. Stouffer acknowledged badly wanting to win this one because it was at a course and community that has meant so much to her.

“The members were good because they weren’t saying stuff like, you’ve got this, it was just good luck and things like that,” she said. “But I remember when it was announced that it was going to be here, I was like, oh my God. I’m happy I could get it done.” 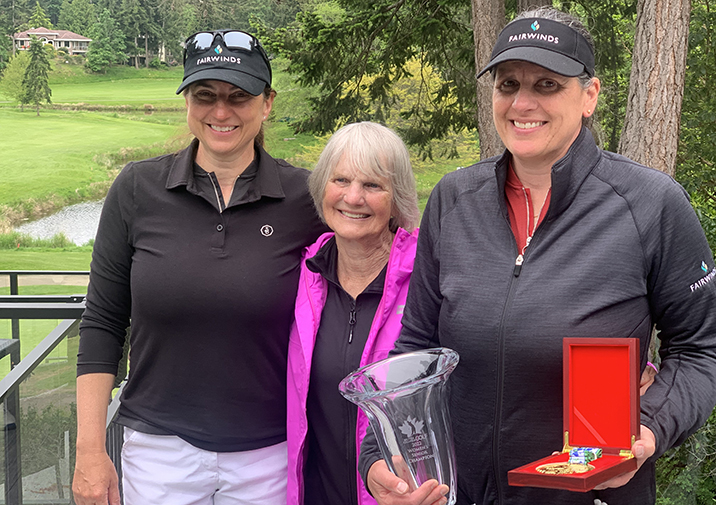 Nanoose Bay has been home for much of Stouffer’s adult life. She took some time away from competitive golf when her husband Ward died suddenly of a heart attack early in 2017. She’s become very serious about the game in the past couple of years and last year won the Canadian Senior Women’s Championship and made it to the semi-finals of the U.S. Senior Women’s Amateur.

Those results opened up some opportunities this summer. She’ll play the U.S. Senior Amateur in Alaska and has a spot in the U.S. Senior Open in Ohio. Next week she’s competing in the PNGA Senior Women’s Amateur at the Suncadia Resort in Washington state. Fairwinds Golf Club recently stepped up to sponsor Stouffer, which helps with expenses.

Turbide was understandably disappointed but proud of the way she fought back. She and Stouffer started the day tied for the lead and seven shots clear of the rest of the field. Turbide bogeyed her first five holes, but never gave up. “I just said it’s not over, keep grinding,” Turbide said. “ I just tried to keep myself in the game. I knew I was not going to play like that all day.”

She acknowledged she’ll be thinking about that short putt she missed on the 16th green for a while. “I don’t know what happened there,” she said. “That’s the one that hurt. It was uphill, I just didn’t hit it.” Both players fired two-over 74s to finish the 54-hole tournament at six-over par. 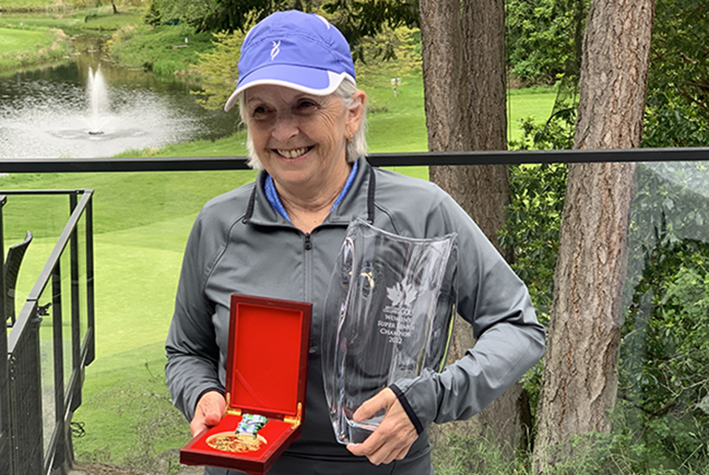 B.C. Golf Hall of Famer Jackie Little of Procter finished third in the Senior Championship, but won the Super Senior title by two shots over Diane Mcfarlane of Surrey. Stouffer, Turbide and Little will represent B.C. at the Canadian Senior Women’s Championship later this summer in Winnipeg. 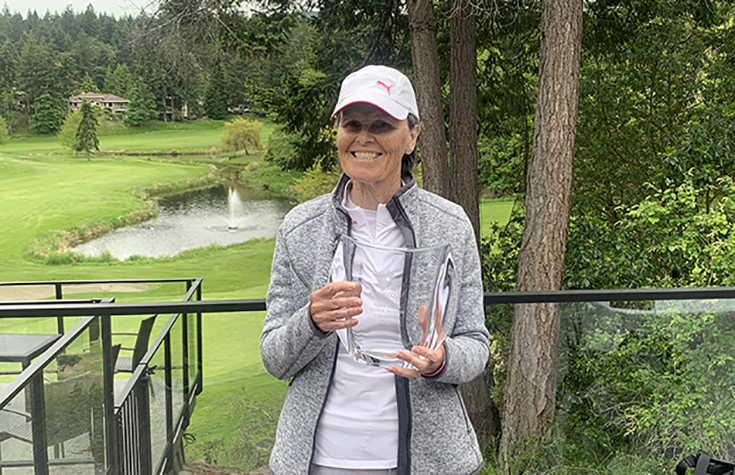 The Nanoose Bay twosome of Sharon Whitehead and Wendy McAdam won the Net Better Ball title with a score of 35-under par. That was two shots better than the team of Josee Deslauriers and Medissa Morrow of Parksville-Qualicum.