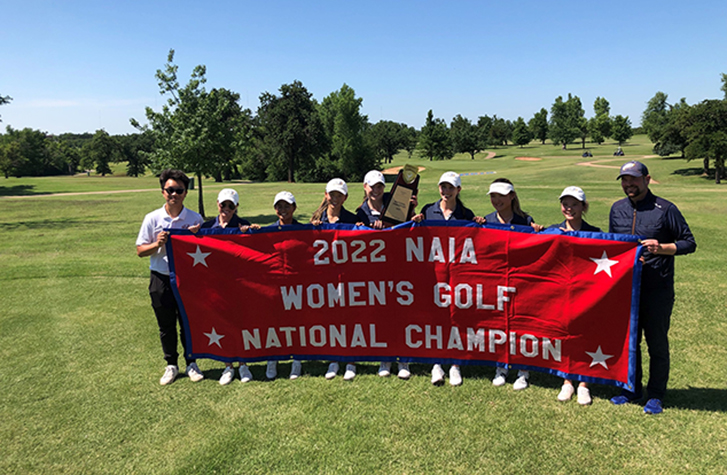 These ’Birds can’t be beat. The UBC Thunderbirds women’s golf team added another chapter to its storybook season by winning the 2022 NAIA Women’s Golf National Championship in Oklahoma City.

The UBC team of Grace Bell, Elizabeth Labbé, Sonja Tang, Emily Li, and Shania Remandaban led from start to finish en route to the national championship. UBC is a perfect 11-0 in tournament play this season.

UBC started the final round with a 10-shot lead on top-ranked Oklahoma City University and had to sweat a little on the back nine when that margin was reduced to just four shots.

Labbé said she knew things were getting tight when assistant coach Keri Moffat approached her on the 17th tee. “Keri came up to me and said, ‘We need you. We need to finish strong,’” Labbé said over the phone. “So then I knew that it was tight, but I think she would have been a little more panicked if we had been behind.”

Labbé responded with a birdie on that 17th hole and made a par on her final hole to help seal the win. “Obviously, the nerves were big because I wanted to do this not only for me but for my teammates,” Labbé said. “I knew they were counting on me. It was stressful, but a good [kind of] stress, and I am happy we pushed through.”

Head coach Chris MacDonald wasn’t surprised. He’s watched this group of young women meet every challenge they have faced this season. “I was just really impressed they were able to stay in it and get to the finish line,” MacDonald said. “It wasn’t easy. We have a great roster, a lot of depth, led by some really clutch players and just great people, so we are very fortunate.”

MacDonald and his players suspected Oklahoma City would make a final-round run. They were playing at their home course, Lincoln Park Golf Club, and, like the Thunderbirds, had been dominating their competition this season. “They have been ranked No. 1 all year and we are playing on their home golf course, so we knew they were going to make a charge at some point,” MacDonald said.

UBC finished the tournament, which was cut to 54 holes after the first round was washed out by heavy rain, at 4-under par and five shots clear of Oklahoma City. Three UBC players — Tang (6), Bell (7), and Labbé (T9) — finished inside the top 10. MacDonald pointed to Bell’s bogey-free 4-under 68 in the second round as one of the keys to victory. “That helped give us that 10-shot lead, which was important,” he said.

This is the sixth NAIA title for UBC’s women’s program. The last one came in 2019 on the same golf course. “Honestly, I still can’t really believe that we did it,” Labbé said. "It was such a crazy week with round cancellations. We didn’t finish the first round and had to go back out early the next morning. And we hadn’t played against Oklahoma City before, so we really didn’t know what to expect and obviously, they had home-course advantage. We just came here and did what we usually do. It feels unreal. Today was a rush of emotions for sure.”

Tang, a native of China who attended high school in Victoria, credits a lot of hard work and great team chemistry for the win. “I think we all push ourselves really hard on working on our game and the energy spreads around to everyone and just motivates all of us,” she said. “We work really well as a team on and off the course.” "It’s an over-used word, but they’re just a very resilient group,” added MacDonald. “They are pretty tough.”

They proved that, even before the event began, when the team faced something much more serious than pre-tournament jitters. In a bizarre and highly unsettling incident, the team was the victim of a random shooting event as they were returning to the team hotel after dinner the evening before the first round was played. “They were sprayed by pellets fired from a passing van. It’s part of a disturbing TikTok trend involving pellet guns. Several members of the team were struck, including alternate Una Chou who was hit in the face.

“One of the pellets just missed her eye and hit her in the face and she has some bruising just above her cheek,” MacDonald said. “The girls did a great job of dealing with it. They just said we have been through so much this year, let’s not let that affect us. They kind of parked it and we will deal with some of the emotions of that over the next week.”

Labbé said she and her teammates were stunned by the incident. “No one was hurt bad, thankfully,” said Labbé, who was struck in the back. “One of my teammates got hit in the face, but it just shows how resilient we are. And obviously, it speaks a lot about the environment of this state here [in Oklahoma] and it is scary ... It makes us really grateful to live in a great city like Vancouver.”

The Thunderbirds will now try to complete their perfect season with another national championship. They are headed to Bromont, Que., for the Canadian University/College Championships, which go June 1-4. “That is what we are hoping for,” said Labbé.

The tournament is being played at a course that Labbé, the reigning Quebec Women’s Amateur champion, knows quite well from her junior golf days. “I am excited to go to a course I am familiar with and going into it undefeated is really exciting,” she said. “I think it is going to be a great week.”

CHIP SHOTS: The University of Victoria also played in the NAIA Championships. The Vikings failed to finish in the top 17, so did not make the cut to play the final round.