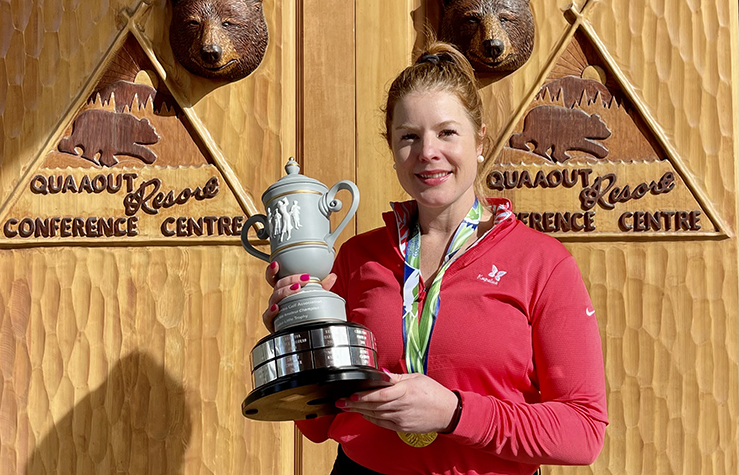 CHASE, British Columbia — Nonie Marler led from start to finish at the B.C. Women’s Mid-Amateur Championship, but that doesn’t mean she didn’t have to overcome a little adversity along the way.

During the final round at Talking Rock Golf Course, Marler was cruising along with a three-shot lead when her tee ball on the par-4 13th hole sailed slightly right, struck the top of a tall tree, and was never seen again.

No one saw it come down — there’s a good chance it remained up in the tree V and suddenly Marler was under some pressure.

She went on to make a double-bogey but only surrendered one shot when Shelly Stouffer of Nanoose Bay three-putted for a sloppy bogey.

“I wasn’t focused when I stood over the golf ball,” Marler said of her tee shot on 13. “I hit a high flair and it hit the tree. You always think you are going to find it. I played the hole fine from thereon. Stuff like that happens. I had some good breaks, too, and you just have to put it behind you and focus on the next shot.”

Marler ended up winning her second B.C. Mid-Am — for players aged 25 and over — in the past three years by three shots, which is the margin she enjoyed when the final round began. She acknowledged that playing with a lead from start to finish, while nice, also brings some additional pressure. “It does, especially mentally, because you play from a different place,” she said.

“You shouldn’t play to protect your lead but, inherently, you can’t help it. So sometimes you probably make more conservative decisions. I am trying to tell myself to stick to my game plan, don’t deviate. I did a fairly good job of that. I am a bit rusty because it’s still the start of the season so I definitely was testing myself a few times.”

The final round was essentially match play as Marler and Stouffer had separated themselves from the rest of the field. Stouffer started her round with what would be her only birdie of the day. An ice-cold putter prevented her from putting much pressure on Marler.

“I had five three-putts today and lost by three,” said Stouffer, the reigning B.C. and Canadian Senior women’s champion. “I don’t understand how I shot 78 today. I hit a lot of greens.”

Stouffer did win the Mid-Master championship for players aged 40 and over. “Shelly and I have played together a number of times,” Marler said.

“We just played together at the PNGA Cup. We played at the Canadian Mid-Am and Senior together in the final groups. She is a great competitor and we have a ton of fun, but I obviously want to beat her and I am sure she feels the same about me. I knew she wouldn’t let up, either, so it was just one of those things where I told myself this is going down to the end.”

Marler finally let herself exhale when she struck a perfect tee shot on the extremely tight par 4 18th hole at Talking Rock. Once that ball found the fairway, she knew she could take it home. “The 18th is a tough hole, it is super narrow,” Marler said. “I knew I was three shots up and I just wanted to commit to the shot and put it in the fairway.”

Like Stouffer, she wasn’t particularly proud of the six-over 78 she shot or her winning total of 12-over. But that was, in part, a reflection of some tough weather conditions. Unseasonably cool temperatures and some strong winds turned Talking Rock into a stiff test for the 54-hole event.

Marler won her first B.C. Mid-Am in 2020 at Campbell River Golf Club and it would not be a surprise to see her win at least a couple more. The Marine Drive Golf Club member has a real passion for the game. After taking a hiatus from competitive golf while beginning her business career overseas, Marler got serious about it again four or five years ago.

She works in finance capital markets in commercial real estate with Cushman & Wakefield in Vancouver. “I love the game and I am super competitive,” Marler said. “It is super fun and obviously it is the start of the season, so I am still a bit rusty mentally. I just need to get the reps in and the only way to do that is to play more.”

Marler is heading to Texas to play in the AGA Women’s Amateur Championship, which is being played May 24-27. Marler has lots of tournament golf planned this summer. And when she’s not doing that, she knows she can always find a game at Marine Drive. “There are a lot of great players there and the guys in the shop are great,” she said. “Everyone at Marine is so supportive and super friendly and you can always find a really good game there.”

Jamie Oleksiew of Surrey finished third while defending champion Jessica Claggett of Kelowna was fourth. Tina Papatolis of Issaquah, Wash., finished second to Stouffer in the Mid-Master championship, while Dianne Fisher of Jasper was third.

A two-person better-ball competition was also held during the event. The team of Brent Pound and Shawn Vanderwal of Kamloops won with a 54-hole score of 12-under. That was two shots better than another Kamloops duo of Taylor Callens and Kris Mattice. Andy Robb and Joshua Zhang, both of Vancouver, were third at nine-under.

CHIP SHOT: The next event on the British Columbia Golf championship schedule is the B.C. Senior Women’s Championship, which goes May 30-June 1 at Fairwinds Golf Club in Nanoose Bay.