LPGA Board Of Directors Elects Mollie Marcoux Samaan As Commissioner 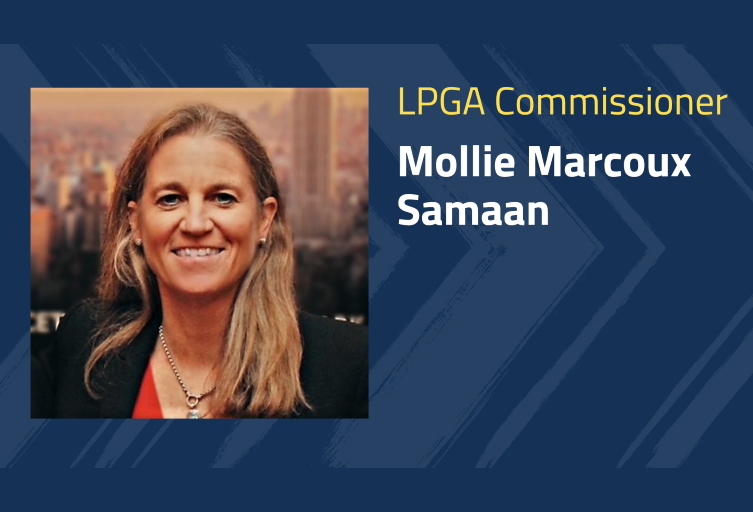 The Board of Directors of the LPGA has unanimously elected Mollie Marcoux Samaan as its next Commissioner.

Marcoux Samaan, currently Ford Family Director of Athletics at Princeton University, will become the ninth Commissioner of the LPGA since its formation in 1950. She will succeed Commissioner Mike Whan who notified the LPGA Board in late 2020 of his intent to step down in 2021. Whan was recently announced as the next Chief Executive Officer of the USGA. Marcoux Samaan will be working with the LPGA Board and the University to transition to her new role in the months ahead.

“Our selection of Mollie Marcoux Samaan as the LPGA’s next Commissioner is the outcome of an extensive and deliberate search process. The position attracted a diverse group of outstanding internal and external candidates, all passionate about the LPGA. We concluded that Mollie is the right leader to guide the LPGA’s next chapter of growth, impact and achievement,” said Diane Gulyas, Chair of the LPGA Board of Directors and the Search Committee.

“Mollie understands the power of golf to change the lives of girls and women. As a values-centred leader, she’s known for her skills in collaboration, managing through complexity, and building a winning team culture. In every role, she’s had an outstanding record of performance in navigating change, forging lasting partnerships, and seeing — and seizing — new opportunities,” Gulyas said.

“Our search process was disciplined and thorough. We were impressed and honoured by the large number of quality of leaders interested in the LPGA. But in the end, Mollie stood above the rest. We were impressed by her track record working with athletes; with her ability to forge new and innovative partnerships; and with her personal passion, authenticity, and proven persistence for excellence,” said Juli Inkster, World and LPGA Hall of Famer and a member of the Search Committee.

“The LPGA Commissioner role is one of the best jobs in sports today and the opportunity of a lifetime. I’m passionate about the game of golf and have been an LPGA fan since I was a little girl. I appreciate the LPGA’s history and the tenacity of its 13 Founders. I’m truly inspired by our Tour players and teaching professionals. I’m excited to dive into the LPGA initiatives to impact women and girls in the game at every age and ability. And to learn about and contribute to all aspects of the LPGA’s business,” said Mollie Marcoux Samaan.

“I believe passionately that sports have the power to change the world. And [at] this moment in time — with the positive energy around women’s sports, women’s leadership, and society’s commitment to diversity, equity and inclusion — I believe the LPGA has an incredible opportunity to use our platform for positive change.

“I’ve devoted my career to developing character, confidence, and opportunities through sports. My mission and the LPGA’s mission are fully aligned: providing women and girls [with] the opportunity to achieve their dreams through golf.

“Under the leadership of Mike Whan and the executive team, the LPGA is strongly positioned for continued growth and impact. I’ll look forward to working with Mike and the leadership team to meet the many people and organizations that have been so integral to the LPGA’s success. With its committed sponsors and fans, talented players and members, and exceptional staff and Board, my role will be to continue the positive momentum and increase opportunities, awareness, impact, and respect for the LPGA worldwide,” Marcoux Samaan said.

Mollie Marcoux Samaan was a passionate multi-sport athlete from the moment she was introduced to sports as a young girl. After watching the LPGA and seeing her older brother play golf, Marcoux Samaan convinced her parents at age 11 to allow her to spend her summer days playing at Newman Golf Course, a public course in Ithaca, N.Y. At 14, she was runner up in the women’s city championship, losing in a playoff. She is a five-time club champion at the North Fork Country Club in Cutchogue, N.Y.

Marcoux Samaan graduated cum laude from Princeton University in 1991. A history major, she wrote her senior thesis on “The Social Construction of Sport and Gender: A History of Women’s Golf from 1895 to 1955.” She was a two-sport varsity athlete, earning four letters each in soccer and ice hockey. In addition to being named First Team All-Ivy in ice hockey all four years, Marcoux Samaan was named to the collegiate women’s ice hockey Team of the Decade in 1990. As a senior, Marcoux Samaan was awarded the C. Otto von Kienbusch Sportswoman of the Year Award, honouring the University’s top female athlete who also displays high scholastic rank and sportsmanship.

She then began a 19-year career with Chelsea Piers Management, the company that owns and operates two world-class amateur sports complexes, Chelsea Piers New York and Chelsea Piers Connecticut, when its first facility opened in 1995. Marcoux Samaan progressed into senior management positions throughout her time at Chelsea Piers, becoming executive vice president of Chelsea Piers’ 400,000-square-foot multi-venue sports complex in Connecticut, a facility with over 300 employees, including professional athletes, Olympians, former collegiate coaches, former Division I athletes, and sports industry leaders. In these roles, she developed extensive and cutting-edge sports programming for athletes of all ages and abilities. She also founded and served as executive director of the Chelsea Piers Scholarship Fund, which offers scholarships to provide athletic opportunities to children in need.

In 2014, she was recruited back to Princeton as the University’s Ford Family Director of Athletics. In her seven years as Director of Athletics, Marcoux Samaan has overseen a department known for achievement and excellence, on and off the field. During Marcoux Samaan’s tenure, Princeton teams won a league-leading 65 Ivy League Championships and finished as high as 30th in the prestigious Learfield IMG Cup standings, which measures the overall athletics success of all Division I Athletics programs.

Marcoux Samaan initiated Princeton Tiger Performance, which focuses on the optimal performance of the University’s nearly 1,000 varsity athletes each year, putting in place programs that enable them to reach their fullest potential as athletes, students and citizens. She crafted a strategic plan for athletics that has continued to evolve and improve Princeton Athletics, including major improvements in facilities, recruiting and retaining talented coaches and staff, creating effective fundraising and revenue growth strategies and increasing marketing and exposure.

In 2020, Marcoux Samaan’s greatest leadership challenges were off the field: navigating the COVID-19 pandemic as well as the flashpoint in race relations and social justice. With both challenges, she demonstrated the ability to navigate complexity and uncertainty, putting people first, demonstrating empathy and taking constructive action. Her calmness and focus kept the athletic department functioning with resilience, growth and optimism and gave the teams, athletes and coaches a rallying point and direction during the most trying times.

This year, Princeton Athletics has proudly celebrated 50 years of women’s athletics, highlighting the extraordinary competitive legacy and the profoundly positive impact so many Princeton female student-athletes have had after graduation.

Marcoux Samaan and her husband, Andrew Samaan, are the parents of three children: Maddie (17), Catie (15) and Drew (12).

About the LPGA Board of Directors and Search Committee

The LPGA’s 2021 Board of Directors is comprised of the Commissioner, eight LPGA Members and six Independent Directors.